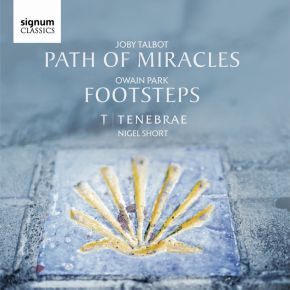 Tenebrae mark their 15th anniversary season with a celebratory re-release of Joby Talbot’s Path of Miracles, as well as the premiere recording of a new work by Owain Park. Inspired by the Camino Frances pilgrimage route to Santiago de Compostela in Spain, Path of Miracles has quickly become a contemporary classic amongst choral music fans. To mark their anniversary year Tenebrae commissioned British composer Owain Park to compose his new work Footsteps as a companion piece to Path of Miracles. A shorter work, Footsteps is themed on similar concepts of travel, solitude and journeying, and blends texts by eight different authors to structure a narrative that cycles the seasons through the view of a lonely traveller. Praise for the original release of Path of Miracles: “After the eerie opening effect - a glissandi, Taiwanese style, bursting into the pilgrims hymn from Dum Pater Familias - you know you are about to embark on a remarkable musical journey ... The music weave