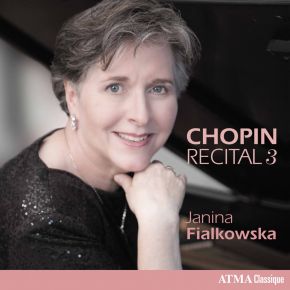 On December 15, 1842, Frederic Chopin wrote to Breitkopf and Haertel, his publishers in Leipzig, offering them a newly composed Ballade and a Scherzo, and mentioning a new Impromptu. The pieces involved were the 4th Scherzo, the 4th Ballade, and the 3rd Impromptu, without a doubt three of the composer’s greatest works. Janina Fialkowska’s third Chopin Recital album is built around these late works. Also included is Chopin’s final major work, the Polonaise-Fantaisie, a piece which stirs up wild and wishful speculations over the direction in which his compositional genius was heading before his fragile life came to its tragically premature end. For over forty years, concert pianost Janina Fialkowska has enchanted audiences and critics around the world. She has been praised for her musical integrity, her refreshing natural approach and her unique piano sound thus becoming “one of the Grandes Dames of piano playing.” Her discography includes many award-winning albums

Frédéric Chopin (composer)More information
24-10-2017 Musicweb
"From the outset the recording quality is excellent, and finely captures the virile piano sound right across the dynamic range."
15-09-2017 Crescendo.de
"But what impresses most is the simple, natural, almost naked poetry of her sound, which miraculously combines warmth with clarity, emotion with intellect, breath with unembellished contours."
08-09-2017 Piano News
"Janina Fialkowska has long since become the "grande dame" of piano music: She is without mannerism, poetic, powerful and yet full of grace."
11-08-2017 Stereoplay
"A poetic dream voyage. An album that won't let you go."
07-07-2017 Augsburger Allgemeine
"Chapeau for this Chopin (5 stars)"