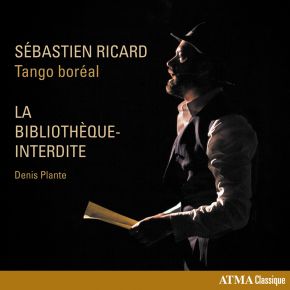 Sebastien Ricard plays the idealistic poet in La Bibliotheque-Interdite (The Forbidden Library), an intimate tango-opera written and composed by Denis Plante. The libretto expands on the memories of a fictional poet who, like his celebrated contemporaries Astor Piazzolla and Jorge Luis Borges, would have been a kind of outsider. He arrived in Buenos Aires in 1940, and with a mix of curiosity and amazement, there discovered the tango. La Bibliotheque-Interdite is an original work in which recitatives and songs blend to create the poignant and pungent mood of magic realism so dear to Argentine culture. The work pays homage to writers and poets such as Borges Discepolo, and Arlt who, along with many others, spoke out against the rise of fascism. In the Tango Boreal ensemble, which provides the musical framework of the opera, Denis Plante’s moving bandoneon and David Jacques’ passionate guitar and charango are fuelled by the earthy rhythms of Ian Simpson’s double bass. S