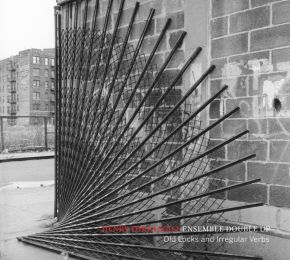 Henry Threadgill’s important new release Old Locks and Irregular Verbs is his heartfelt tribute to an old friend, the composer-conductor Lawrence D. “Butch” Morris, who passed away in 2013. He describes the work as “An emotion, a thought, a feeling that I retained in my memory of Butch.” Threadgill first came to know Morris  a significant figure in jazz who was responsible for creating a distinctive form of conductor-led collective improvisation for large-ensemble built on a technique he called “Conduction”  when he moved to New York in the mid-1970s from Chicago. They were subsequently members of saxophonist David Murray’s Octet in the early 1980s when Morris was still best known as a cornetist. Close friends for almost four decades, they lived near each other in the East Village and were both Viet Nam War veterans, but mostly, they were fellow musical explorers who were each keen on developing his own individual creative voice.

Old Locks was commissioned by and premiered at New York’s Winter Jazz Fest in January 2014, where it was performed twice in front of rapt, overflowing audiences at the historical Judson Memorial Church. It features Ensemble Double Up, Threadgill’s first new band to record in fifteen years, an unorthodox instrumental combination of Jason Moran and David Virelles on pianos, Curtis Macdonald and Roman Filiu on alto saxophones, Jose Davila on tuba, Christopher Hoffman on cello, and Craig Weinrib on drums. Threadgill, who is of course also well-known as a saxophonist and flutist, says that he has always wanted a group where he didn’t have to play so that he could focus on composing and sculpting the music. The work opens an exciting new chapter in the ever evolving artistry of one of the greatest composers in modern music.