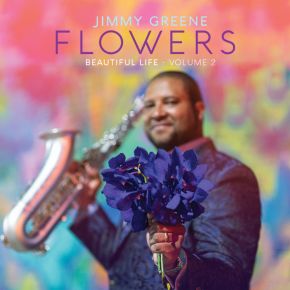 Jimmy Greene’s 2014 album, Beautiful Life, celebrated the life of Ana Márquez-Greene, his 6-year old daughter who was one of 20 children and six educators killed on December 14, 2012 at Sandy Hook Elementary y School in Newtown, Connecticut. Now, he continues to honor and memorialize her spirit with Flowers – Beautiful Life, Volume 2, his second release for Mack Avenue Records.

Greene again fulfills his stated imperative of “reflecting the way that Ana lived.” Here, Greene hones in on Ana’s love of dance with a kinetic, groove-filled program comprising ten original compositions — including two Greene-penned lyrics—and his arrangement of the “new standard,” “Something About You.”