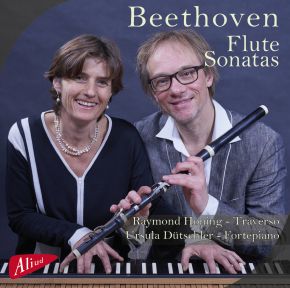 The Franco-Dutch flutist and conductor Louis Drouet (1792-1873) was one of the great soloists of his day. Born in Amsterdam, he began his career at the court of Louis Bonaparte, then king of Holland. The King was so impressed with the 15-year-old flutist that he presented him with a crystal flute by the famous Parisian maker Claude Laurent, a flute which today belongs to the permanent collection of the Rijksmuseum in Amsterdam. Drouet was later appointed to the court of Napoleon in Paris. Drouet quickly developed an international solo career, performing in much of Europe and even in the United States. With his friend, Felix Mendelssohn-Bartholdy, he made concert tours to London and Paris in 1828 and 1829.

The rich depth of Beethoven‘s music is truly a gift for life, since, just as with the sonatas of Bach, there is always something new left to discover. Each interaction with Beethoven‘s music reveals a new part of his musical imagination.

As it should. Never a dull moment with Beethoven!

Ludwig van Beethoven (composer)More information
20-12-2017 Kerk & Leven
"A surprising CD, on which we meet great interpreters."
06-10-2017 Luister
"This alternative on the not so cool flute is also superior in its way."