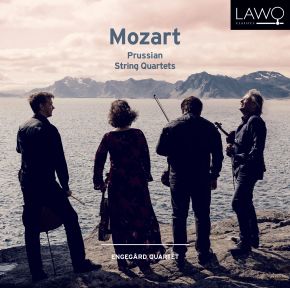 The Engegard Quartet, born under the midnight sun in Lofoten in 2006 and now one ofScandinavia's most sought-after chamber music ensembles, is very excited to launch a recording partnership with the ambitious and visionary recording label Lawo Classics. It is a huge honor and responsibility to record Mozart's string quartets, but it feels right to take one of our most cherished concert programmes into the recording studio. We have been working on Mozart's string quartets since our first notes together. Our shared love for Mozart's music, and particularly our primarius, Arvid Engegard's passion for Mozart reflected in his choice of repertoire both as a conductor and violinist throughout the last three decades, make recording Mozart's string quartets a timely project indeed. In this album we present the three final quartets Mozart ever wrote, known as the ''Prussian'' quartets, because of their dedication to teh King of Prussia, Friedrich Wilhelm II. They are intricately co

Wolfgang Amadeus Mozart (composer)More information
06-10-2017 Fono Forum
"The Norwegian formations have their own unique and sometimes even eccentric approach. They combine their wonderfully intense legato with a youthful freshness and moving energy, which is reflected in a gripping articulation, but also in an unusually fast tempo."
25-09-2017 Musicweb
"There should have been a set of six quartets, but the Prussian court did not pay Mozart, who moved on to other projects. We should rejoice in the three he completed, especially in such spirited performances as these."