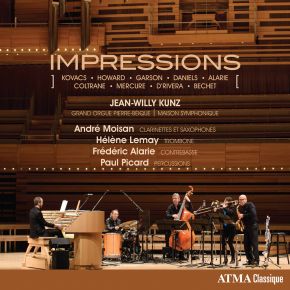 Impressions featuring music by Coltrane, Bechet, and D'Rivera, among many others, is an album unlike any other. Organist Jean-Willy Kunz gathered a group of musician-friends from the realms of classical and contemporary music, pop and jazz. They embarked on a musical trip around the world, exploring an original and diverse repertoire of traditional Eastern European dance music, klezmer, and jazz. Listeners will discover a kaleidoscope of fascinating music ranging from Petite fleur by Sidney Bechet, to Impressions by John Coltrane, to Frank Sinatra's hit Fly Me to the Moon. The organ as it's never been heard before! As the Montreal Symphony Orchestra's first organist in residence, Jean-Willy Kunz is responsible for developing and showcasing the MSO's Grand Orgue Pierre-Beique. Andre Moisan, an internationally renowned clarinetist, has been performing as soloist, chamber musician and member of the MSO since 1977. Helene Lemay, a seasoned jazz trombonist, performs regularly i