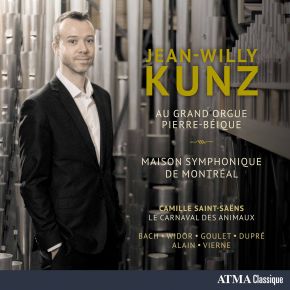 In selecting the program for his first solo recording, Jean-Willy Kunz was naturally drawn to music by composers from his native France including Jehan Alain, Charles-Marie Widor, Marcel Dupré, and Louis Vierne, while a work by Québécois Maxime Goulet provides a contemporary flavor. These are paired with the great Toccata and Fugue in D minor by J. S. Bach.

A highlight of this recording is Kunz’s transcription of Camille Saint-Saëns’ Le Carnaval des animaux, which he first performed in 2014 for the inauguration of the Pierre-Béique organ. Kunz’s transcription demonstrates the organ’s ability to render a wide range of orchestral colours and textures.

The organ at Maison symphonique de Montréal was designed and built for the OSM by the renowned organ builder Casavant in collaboration with architects Diamond Schmitt Ædifica. The  large scale Opus 3,900 organ boasts 109 registers, 83 stops, 116 ranks and 6,489 pipes, and holds its own in orchestral works.