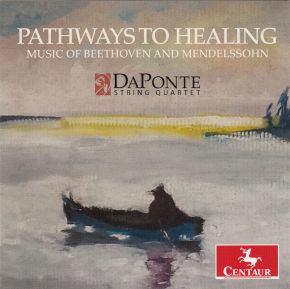 The two pieces chosen for this new recording are based around a central theme: healing. Beethoven's String Quartet in A minor, Op. 132 was written after Beethoven had recovered from a serious illness which he, at the time, worried would be fatal. He had been afflicted during the entire winter of 1824-25, and headed the third movement with the words "Heiliger Dankgesang eines Genesenen an die Gottheit, in der lydischen Tonart" (Holy song of thanksgiving of a convalescent to the Deity, in the Lydian Mode). The Mendelssohn quartet is inspired by a different kind of healing, and was composed a few months after the death of Ludwig van Beethoven. It is heavily inspired by Beethoven's late works, and is one of the most significant examples of cyclic form in music. The DaPonte Quartet is based in Maine, and has a mission to connect audiences to composers and their influences by bringing to life the human context of each score's creation.