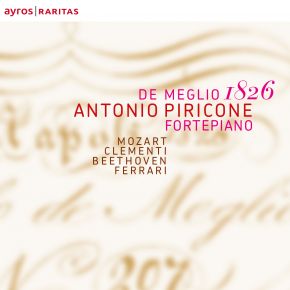 An imaginary trip, once again, on what is Early Music today, on how it could manifests, its meanings, and the issues related to "text and context" integrated to an informed performance practice. We give chance to our imagination to explore, rebuilt paths and disclose them, as we cannot necessarily index what exactly happened with the most [extensive and] accurate modern microscopic precision.

It surely was an interesting journey on being aware of the need to take into account compromises and variables; to realise how each of us has an inner voice and, likewise, the composers, the interpreters, the instruments. Last but not least the instrument builders at that time who had to deal with the progressive and unceasing tasks demanded by the society and users of the time.

One thing seems still to have credit: Variety rules many aspects of musical life, in the late 18th century and the beginning of the 19th century. Together with a profound transformation of the social and cultural structure of the time, this would probably lead to the individualism which we like to recall as Romanticism. Variety is found in instrument making, in conceptual performing approaches, defining in the specific case different “piano schools”, in compositional forms and within the same accustomed stylistic form; in sound production concepts between instrument families and within the same instrument itself. One could probably go on and on to a such a degree, trying to define and list peculiarities which might make us loose the sense of perspective.

Understanding the relation and the interrelation of all of these issues, validating heritage and legacy in the historical frame, may give us the mindfulness and make us realise how crucial is at some point to zoom out and harmonise contents and containers, utensils and matter in order to gain back the unity of the overall topic.

All these ingredients, and more, form and give dimension to the final result which in its single segmentation would not serve otherwise a purpose - if any, nor any aim to make Early Music today. With this perspective I wish the listener would approach this audio work, as a never-ending process rather than a dogmatic statement. I wish you all a good listening journey.
[Antonio Piricone]

Wolfgang Amadeus Mozart (composer)More information
05-01-2018 Die Toonkunst (DE)
"With Piricone a artist has been found, who the sonatas of Mozart, Clementi, Beethoven and Giacomo Gotifredo Ferrari (op. 10, no. 3; first studio recording) is playing like telling stories, musically sensitive and captivating."
24-12-2017 Klassik.com
"Antonio Piricone plays piano works from around 1800 on a clearly younger historical pianoforte. This gives classical and classicist works their very own warmth and a South Italian bright sound."