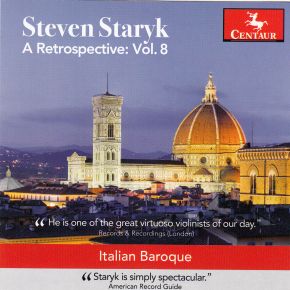 Violinist Steven Staryk is no stranger to critical accolades. American Record Guide wrote, “Staryk is simply spectacular,” and Records and Recordings says, “He is one of the great virtuoso violinists of our day.” This release is the eighth volume in Staryk’s journey through his incredible repertoire. For this release he has chosen works from the Italian Baroque, from composers such as Tertini, Locatelli, Vivaldi, and Corelli. Staryk’s entire anthology will consist of thirty discs, which detail his finest performances throughout his career. Of the anthology, scholars write, “In my opinion, your anthology is one of the most important recorded documents in violin history,” (Stephen Shipps, University of Michigan) “This incredible compiled document will be an exceedingly important resource for musicians in Canada and throughout the world,” (David Visentin, The Royal Conservatory of Toronto)