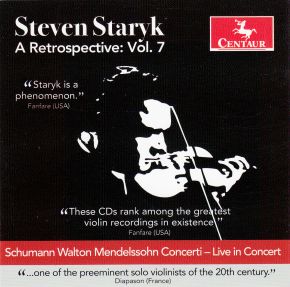 The Canadian violin virtuoso, author, and chamber musician Steven Staryk’s performing career has encompassed half a century. A child prodigy, he served as concertmaster of the Royal Philharmonic (where he was the youngest concertmaster appointment in history at 24), along with The Concertgebouw Orchestra of Amsterdam, the Chicago Symphony, and the Toronto Symphony. In the early 1950s during the McCarthy era, Staryk was a part of the group coined the ‘Symphony of Six’, denied entry to the U.S. for the Toronto Symphony Orchestra’s tour. Volume 7 of this ongoing and welcome retrospective brings us live remastered recordings of Staryk’s sensitive and inquisitive playing with Schumann’s Concerto in D Minor, Walton’s Concerto and Mendelssohn’s Concerto in E Minor and provides more evidence that this retrospective is an overdue one.