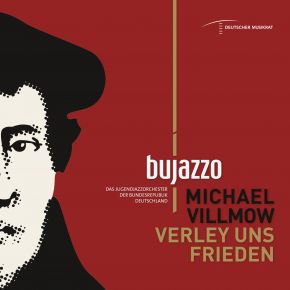 Martin Luther's thesis in 1517 was the beginning of the Reformation - An event which has a world-historical significance in its impact on politics, religion, culture and society. In 2017 the Reformation Jubilee is celebrated nationwide with a variety of events.
The BuJazzO is also participating in this 500th anniversary.

VERLEY UNS FRIEDEN - this Latin choral in the arrangement of Martin Luther serves as the title of a commission composition, composed by Michael Villmow for the BuJazzO and a vocal ensemble.

The focus is on the setting and interpretation of selected Luther texts and chorales.The 10-piece vocal ensemble of the BuJazzO is an integral part of this program. As an artistic director, a personality has been found who has both experience in the composition, arrangement and direction of a big band, as well as in the field of composition and arrangement of church music, in order to create something new and unique for the Luther Jubilee year. Villmow, himself a saxophonist, has the right mixture of education and many years of experience in composing and directing choirs and big bands.

"The work VERLEY UNS FRIEDEN will reflect respect for the strength, courage and spirituality of Martin Luther and the Reformation, but also before the musical tradition. However, this will be done from today's musical and personal perspective, in the sense of Luther's and jazz! With space for individuality, creativity and individual, also freaky ideas of the soloists - supported by the community of the ensemble and the overall sound, "says Michael Villmow.