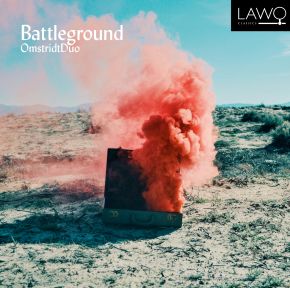 OMSTRIDT DUO ('DISPUTED DUO')
We have been exploring and performing the repertoire for trombone and organ for the best part of twenty years. In this seemingly narrow field of interest, we have encountered inspired, idiosyncratic and beautiful music. Composers who set out to write for this combination maximise the possibilities of the two instruments to the fullest. Consequently the music consists of significant contrasts in dynamics, register, expression and timbres. Composers tend to allow the creative juices to flow when composing for trombone and organ. They create cathedrals of sound and counterbalance this grandeur by exploiting opportunities to play softly, almost inaudibly. With few exceptions, our repertoire was written during the last half-century, and this allows us to help ourselves to the plethora of musical pickings from the twentieth and the twenty-first century.

On this album, we present works composed exclusively for us, in addition to one core work for trombone and organ, Petr Eben’s Two Invocations. Stig Nordhagen has written an opening piece which will knock the socks off the listener, Lars-Thomas Holm has composed a towering epic, and Jon Laukvik has provided us with an opulent harmonised capriccio. Arne Rodvelt Olsen’s three contributions vary in dimension from the cheerful Intrada, via the stately and varied Fantasia, to Missa’s extensive musical universe. We are proud to present this music and are delighted that these composers have poured their inspiration into our requests.