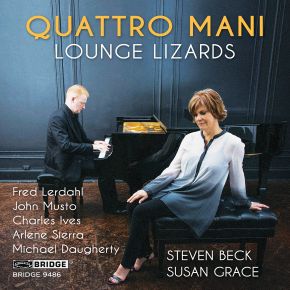 The duo piano team Quattro Mani has had a distinguished history, consistently generating audience enthusiasm and rave notices for their concerts and recordings. Formed in 1989, Quattro Mani’s intense involvement with modern repertoire has led to dedications and collaborations with leading composers, including George Crumb, Joan Tower, Paul Lansky, Poul Ruders, and Frederic Rzewski. Both Susan Grace and Steven Beck have earned recognition as soloists and chamber musicians and have formed one of the most dynamic piano duos before the concert-going public.  Their latest recording, Lounge Lizards, encompasses a wide range of repertoire, spanning Charles Ives's masterpiece of 1925, through a series of works by four of today's leading composers.