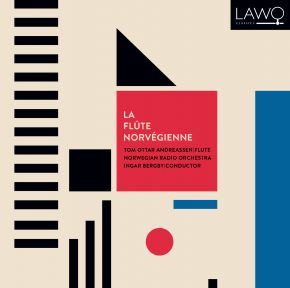 All four works were composed between 1953 and1963, a period of change in Norwegian musical life and a decade in which Norwegian composers worked in widely varied traditions, from Fliflet Bræin’s light-hearted music to Hovland’s serial style.

Andreassen has selected these works precisely because they demonstrate this diversity of expression and style and explore the flute’s full range. All were written for Alf Andersen and Per Øien, who like Andreassen studied with Ørnulf Gulbrandsen and served in turn as Principal Flute in the Norwegian Radio Orchestra. Thus it is extra fitting that it is the orchestra featured on this recording, led by conductor Ingar Bergby.

The Norwegian Radio Orchestra is known and cherished throughout the land and regarded by music-loving Norwegians with a unique combination of respect and affection. The orchestra is comprised of highly talented and versatile classical instrumentalists whose musical philosophy is distinguished by a light-hearted approach and a curiosity for all kinds of music.