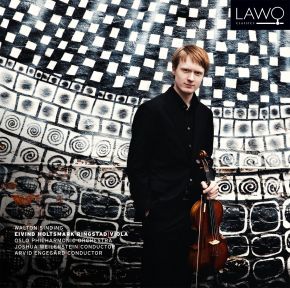 Predicting which musical currents would sweep the young William Walton along in in the mid 1920s must have been tricky. The composer had already given birth to the acerbic, neo-classical take on texts by Edith Sitwell that was Façade (1922). Two years later he spent a season knocking-out foxtrots for the Savoy Orpheus Band, and even started work on a concerto for two pianos, jazz band and orchestra. Four years after that, Walton hatched plans for his first orchestral concerto proper: a score that would take elements from both those pieces but would stand with at least one foot in the late Romantic tradition of Elgar, Bax and others.

The new concerto’s chosen solo instrument had something to do with that tradition. Elgar had shown in his Cello Concerto of 1919 how an instrument of modest projection could be deployed assiduously in combination with a large orchestra. Drawn to the viola as an instrument of depth with some special status in compositional circles (composers from Mozart to Britten played it and adored it), Walton decided that a Viola Concerto was viable. In the words of the composer’s biographer Michael Kennedy, the ‘dark and huskily passionate sound of the viola became the perfect medium for the [concerto’s] prevailing mood of plaintive melancholy’.

But it wasn’t just the viola’s sound that tempted Walton. At the time, Britain boasted the preeminent viola player of the day, the virtuoso Lionel Tertis. Sir Thomas Beecham had suggested Walton write a concerto for Tertis, and the composer started to sketch one out in the autumn of 1928. But when Walton sent Tertis the finished score the following year, he didn’t get the response he’d been hoping for. Tertis ‘turned it down sharply by return of post, which depressed me a good deal’ – so recalled the composer in an interview in 1962, the year he revised the concerto, thinning down some of the woodwind and brass instrumentation and adding a piquant harp.

Walton soon became worried that he’d never find a soloist of suitable standing or even ability for his new concerto, and even considered adapting it for violin. A colleague at the BBC suggested he offer the piece to Paul Hindemith, not only one of Europe’s foremost composers but undoubtedly one of the finest viola players around too. Walton agreed, despite niggling concerns that Hindemith might notice what a debt his piece owed to Hindemith’s own viola concerto entitled Kammermusik No 5; ‘one or two bars are almost identical’, Walton admitted.

In the event, Walton wasn’t such a fan of his German colleague’s viola playing. He described Hindemith’s performance at the concerto’s premiere on 3 October 1929 as ‘rough’, explaining how he ‘just stood up and played.’ Hindemith, meanwhile, took aim at the orchestra: ‘It is bad’, he complained during rehearsals, ‘it consists mostly of women and English ones at that.’ Remarkably, given the circumstances, the concerto was well received by the audience and the critics at the Queen’s Hall in London. Even Tertis confessed that he ‘had not yet learnt to appreciate Walton’s style’ at the time of his initial condemnation, and took the piece to his heart.

Tertis may well have rejoiced at the prospect of a concerto for his much-maligned instrument by an English composer that felt like it had some staying power. True, the concerto was a priceless gift to the viola-playing fraternity. But it was also far more, and remains so: a piece of immense style whose feelings of longing plot Walton’s deep-seated sense of personal unease – the triumphant international musician versus the vulnerable young man in search of himself. For the critic Donald Francis Tovey, the concerto was ‘neither sensitive nor anti-romantic’. Perhaps he was referring to the concerto’s occasional anger, its frequent darkness, its unerring lyricism and its quick-witted excitability.

The concerto’s lyricism, in fact, represented a subtle re-pointing of Walton’s evolving style following the rumbustious Portsmouth Point Overture and the brittle Façade. The concerto begins with a lyrical outpouring from the viola that is fully in keeping with the instrument’s reserved but expressive qualities and appears to tap melancholic tendencies that were becoming increasingly prominent in Walton’s musical voice.

The principal theme, which emerges from a rocking figure on orchestral strings and clarinet, has a major-minor ambiguity at its heart focused on the determining interval of a third. That theme – or rather, that interval – becomes something of a motto even after the introduction of a more animated secondary theme, heard first on the viola with pizzicato orchestral strings beneath. Walton transforms the first theme rhythmically in his development section, but those teasing tonal qualities remain.

As in his later concertos for Cello and Violin, Walton contrasts more introspective outer movements with an agile, witty central scherzo. The Viola Concerto’s capering ‘Vivo’, built of three interweaving themes, has shades of spiky 1920s neo-Classicism (there are obvious harmonic references to Stravinsky and Prokofiev) and also of the consistent rhythmic drive that might well have characterized Walton’s abandoned concerto for pianos and jazz band.

In the wake of that exuberance Walton’s huge finale emerges, presenting the clearest picture so far of the composer’s maturing style in music that becomes thrillingly imposing. Immediately we hear some techniques that will become Walton trademarks: looping patterns, irregular rhythmic devices and emphases, conjunct motion and all the forward impetus with which those techniques invest the musical conversation.

The movement introduces new material but eventually recalls themes from the opening Andante. The bassoon’s tiptoeing introductory idea is one such new theme despite appearing as little more than a cyclic accompaniment at first. Once the soloist and orchestra have got hold of that idea, the viola steps through a set of triplets and into a bittersweet melody employing sighing double-stops.

The viola determinedly weaves its way towards the movement’s climax before stepping out of the picture just before that climax takes root in the manner of a grand orchestral fugue. When the solo instrument returns, it does so with that magical opening theme from the first movement, which has now harnessed the finale’s opening idea as an accompaniment (a trick Walton would repeat in his Violin Concerto). The composer’s biographer Michael Kennedy has described this ‘eloquent epilogue’ as ‘the single most beautiful passage in all his [Walton’s] music, sensuous yet full of uncertainty.’ That uncertainty comes in part from the continued pitting of major against minor; this time the orchestra rooted in the minor while the viola overlaps it in the major.

Walton was exposed to a world of differing musical influences in the years that led to his Viola Concerto, a situation as much connected to the broader musical developments of the early 1900s as to his life at the heart of cosmopolitan London’s creative in-crowd. The situation was rather different for Christian Sinding, who was born in Kongsberg in central-southern Norway half a century before his English counterpart. Sinding’s single mother moved the family to Oslo (then Kristiania) in 1860, where her son attended the Cathedral School before joining the staff of a piano factory.

But as Sinding showed signs of serious talent in his twenties, there was little debate concerning which direction he should head in. That direction was south, to Mendelssohn’s conservatory in Leipzig, where the Norwegian composers Kjerulf, Grieg and Svendsen had all studied previously. Sinding arrived in Leipzig in 1874, moving to Munich in 1882 before returning to the former city in 1886. Soon after that he made his breakthrough with a Piano Quintet that was first performed by Adolph Brodsky’s quartet with the composer Ferruccio Busoni on piano.

Though he remained in Germany for much of his life and even spent time in the USA, Sinding was viewed as a Norwegian composer second only to Grieg in standing in his lifetime. But while Grieg’s time studying in Leipzig had secured his technique in order to allow him total creative freedom – to find his distinctly Norwegian voice – Sinding didn’t go so far. His style was more overtly influenced by that of Liszt and Wagner, and despite some sense of Norwegian simplicity and fresh-air, his music was more contrapuntal and rich. Rarely did it make significant use of Norwegian folk elements.

Though Sinding was Walton’s senior by some 46 years, the Second World War changed the course of both composers’ lives. Walton, in his forties, drove ambulances and wrote a series of film scores that would establish his name outside the concert hall and inject his creative life with vital new impulses (as much as he derided the work as ‘boring’). Sinding, in his late eighties and suffering from dementia, joined the Nazi party just two months before he died. Though the composer had consciously aided Jewish musicians and condemned the occupation of Norway privately, it was enough to ensure his music wasn’t heard in his homeland for at least thirty years.

Unlike Walton, who never mastered an instrument, Sinding was a fine violinist and wrote a total of three concertos for the instrument. That prowess on the violin was doubtless the impetus behind the concertos and the Suite in A minor Op 10, written ‘in the old style’ for violin and piano in 1889 and orchestrated soon afterwards. The extent to which Sinding understood his instrument is evidenced in the fact that the Suite’s most adoring fans have been violinists too: Jascha Heifetz and Fritz Kreisler are among those virtuosi who cleaved to the Suite throughout their careers.

On this recording, we hear the Suite in an arrangement for viola and orchestra by Nils Thore Røsth, a violinist in the Orchestra of the Norwegian Opera and Ballet. That re-casting has an effect on the music’s mood and resonance as much as on its title: the suite is no longer in A, but cast a fourth lower in the key of D minor. Structurally, Sinding’s music remains unchanged. The subtitle ‘in the old style’ is most easily understood in the context of the opening Presto (‘fast’) movement, whose harmonic progressions and rapid figurations hark back to those of the Baroque period.

That perpetuum mobile opening serves as an antecedent to the slow Adagio, scored low on the violin in Sinding’s original but which in Røsth’s arrangement and with Eivind Holtsmark Ringstad’s velvety tone resounds with even more autumnal colouring. There are Baroque elements to this movement too, including the suggestion of a canon (an imitative device) and some touches of eighteenth-century German ornamentation. But in its warmth of expression the music is absolutely Romantic. Likewise the energetic finale, whose opening theme blossoms from Baroque order into Romantic freedom before halting for a technically intricate cadenza (itself full of Bach-style double-stopping) and eventually twisting from the minor up into the major on its final chord – an irresistible Baroque convention.