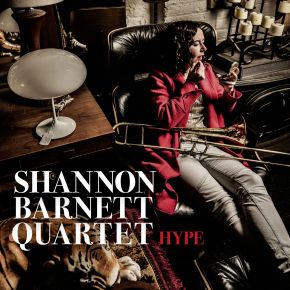 Since moving to Germany, Shannon Barnett has become very active in the local scene. Her quartet, featuring Stefan Karl Schmid (tenor saxophone), David Helm (bass) and Fabian Arends (drums) was nominated as a seim-finalist in the 2017 Neuer Deutscher Jazzpreis. They have performed widely in Germany, including at the Acht Brücken and Winterjazz Festivals, the Peng Festival and IG Jazz in Mannheim. In 2016, they toured Australia, performing at the Wangaratta Festival of Jazz and Sydney Women's Jazz Festival.
This is the quartet's debut album!

Hype:
Beginning with just a few intriguing tones, Schmid and Barnett introduce us to the album with a perfectly crafted duo improvisation, leading eventually to an energetic odd-time groove that introduces the wonderfully synchronised and active rhythm section team of Helm and Arends. Barnett then enters with a fiery rhythmic solo, a trademark of her gutsy approach to the trombone. After the band takes a minute to calm down, we are slowly introduced to Schmidʼs superb tenor playing, and broad range as an improviser, before the band rises again to finish the tune with an explosive, tight finale.

Lembing:
The influences of harmolodic improvisers such as Ornette Coleman and Don Cherry are evident in this composition. The three melodic sections share similar beginnings, but drift off into other territories, allowing the soloist to explore different environments, finally finishing with a solemn Latin-music-inspired resolution.

People Donʼt Listen to Music Anymore:
As with many of the melodies from her compositions, this tune is rhythmically based on the title. It was inspired by the overwhelming amount of publicity and marketing one can find on the internet about various musical projects and how sometimes because of this, the essence of the music can be diluted. After a haunting ballad-like section, the piece morphs through a free improvisation and then takes a turn towards a melancholy chorale, before surprising the listener with what could best be described as a good old-fashioned hoe down, featuring Barnettʼs blazing trombone on the top.

Red-Bellied Stickleback:
Composed during Barnettʼs short stay in Banff, Canada, this piece is inspired by a desire to break away from the traditional roles in the quartet. The trombone begins with a guitar- like riff, that underpins the polyphonic texture that follows. The Red-Bellied Stickleback itself is a type of fish with interesting behavioural features.

Speaking in Tongues
Again based on a short rhythmic pattern, the middle section of this piece was composed first, borrowing from an episode of the animated television series ʻFamily Guyʼ, in which the main character pretends to be able to speak Italian. After the complex introduction, the soloists are allowed some freedom in a swinging, sometimes bluesy open section, a window into Barnettʼs previous experiences playing swing and early jazz.

PG3
Composed in honour of the Australian pianist Paul Grabowksky, PG3 is a soulful 6/8 ballad, that displays Schmid and Barnettʼs compelling interactions and conversations, as well as their stunning ability to deliver unison passages as if they were only one instrument.

Ok Compupid
Inspired by the Australian musician Thai Matus, Ok Compupid weaves and jumps through various time signatures, before landing on a rapid, pulsating groove that showcases Schmidʼs technical prowess and ability to develop an interesting story from only a simple starting point.

Chasing the Second
Again displaying Barnettʼs love for various styles outside of the jazz realm, this piece features a reggae section (originally inspired by the music of the Art Ensemble of Chicago), over which her lazy trombone hangs, almost jokingly commenting over the subtle yet hypnotising support from Helm and Arends.

Between the solo sections we are treated to fast-paced intricate unison sections, deftly delivered by the entire quartet.

The Spirit is Willing, but the Flesh is Weak
This composition begins with a lilting unison melody from Schmid and Barnett, accompanied gently by Arendʼs delicate cymbals and Helmʼs warm bass sound. The bassist leads the quartet out of the melodic section and into an expansive, tranquil bass solo, before combining with Arends to construct a burning fast swing foundation, which Schmid and Barnett contrast with a transcendent pentatonic unison.
The piece is reiminiscent of and inspired by the late works of John Coltrane and other jazz musicians who sought a spiritual connection through their music.

Fabulous album will give plenty of airplay 5mbs 99.9FM and 5mbs.com