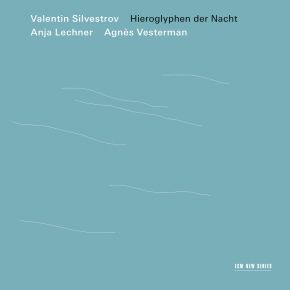 Released in time for the great Ukrainian composer’s 80th birthday on September 30, Hieroglyphen der Nacht features Valentin Silvestrov’s music for solo violoncello and for two cellos. German cellist Anja Lechner has had a long association with Silvestrov, first documented on the Grammy-nominated leggiero, pesante in 2001. Here she plays, alone, Augenblicke der Stille und Traurigkeit (of which she is the dedicatee), Lacrimosa, Walzer der Alpengöckchen, and Elegie (which calls for her to play both cello and tamtams). Lechner is joined by French cellist Agnès Vestermann, a frequent duo partner, to play Drei Stücke (dedicated to both musicians), 8.VI. 1810…zum Geburtstag R.A. Schumann, Zwei Serenaden, and 25.X.1893…zum Andenken an P.I. Tschaikowskij. As so often with Silvestrov, the compositions often take the form of metaphorical conversations with composers of the past and the present. Tchaikovsky and Schumann are amongst the composers referenced here, while Lacrimosa is a reaction to music of his friend Tigran Mansurian. “My own music is a response to and an echo of what already exists,” says Silvestrov, viewing his oeuvre as a series of “codas” to music history. Hieroglyphen der Nacht was recorded at Lugano’s Auditorio Stelio Molo RSI, and produced by Manfred Eicher.

Anja Lechner (artist)More information
Valentin Silvestrov (composer)More information
02-02-2018 Musicalifeiten
"Much of the music that Silvestrov has written since the mid-seventies has something nostalgic in a very accessible way, something of comfort, but also something to awaken and dream. It is precisely those qualities that are clearly expressed in metaphorical conversations by both dedicated cellists."
01-12-2017 Luister
"Most parts of this CD do not last longer than two or three minutes and mainly consist of small motifs that join together to create a breathtaking story. Silvestrov, who was present at the recordings himself, can count on cellist Anja Lechner who has been familiar with the composer's work for years. And you can hear that."
24-11-2017 Pizzicato
"

Valentin Silvestrov’s style can be characterised as calm und introvert, like a prayer. His works for cello solo or duo have found highly committed performers in Anja Lechner and Agnès Vesterman. The two cellists dedicate all their eminent skills to these almost silent works.

"
17-11-2017 Klassieke Zaken
"The German cellist Anja Lechner, who has been an admirer of Sylvestrov's intimate music for twenty years, and her French colleague Agnès Vesterman interpret Sylvestrov's miniatures delicately and with modest imagination."
09-10-2017 Crescendo
"On this disc, Silvestrov ‘speaks’ of hieroglyphics. As is often the case with composers who are part of this vast aesthetic movement, music has a clear spiritual orientation. This is probably the reason why we speak of holy minimalism, in opposition to the repetitive music of a Philip Glass or a Steve Reich. The cellist Anja Lechner has recorded about twenty discs at ECM, and this shows us a big palette of styles.
Sound 10 - Booklet 10 - Repertoire 7 - Interpretation 10"