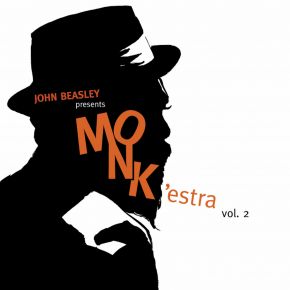 If one were to have access to a time machine and could go back to see legendary bandleader Thelonious Monk in concert during the 1950s and ‘60s, you’d likely see him so compelled by the music that he would retreat from his piano mid-performance and conduct his band, no matter how small or large, through an impassioned dance. But behind the joyous dance that overtook the stage lay the societal struggles a jazz musician endured to present that 90 minutes of musical freedom – a tale of police harassment, systemic oppression and constant battles for equality. Fast forward to 2017 and composer-arranger-pianist John Beasley is using Monk’s spontaneous movements and experiences as the basis for conducting radically re-conceived versions of the late composer’s music for his critically acclaimed big band project: MONK’estra.

Beasley expands on the inspiration that earned him two GRAMMY® Award nominations, plus widespread critical and popular acclaim, for MONK'estra, Vol. 1.  Vol. 2’s 10 songs explode into new musical experiences due to the collective unit embracing a new strain of jazz, which features diverse sounds and a broad base of influences from the entire black music canon.