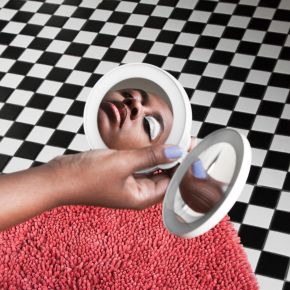 McLorin Salvant’s music has been featured in multiple Chanel “Chance” campaigns and is included in the soundtrack for HBO’s acclaimed film, Bessie. New York Times Magazine included her recording of “Trolley Song” as one of “25 Songs That Tell Us Where Music Is Going,” The New Yorker profiled her at age 27, Vanity Fair featured her in their “Millennials That Are Shaking Up The Jazz World” piece, Essence Magazine noted her as one of “13 Emerging Black Women in Music,” and Gilles Peterson included her as an “Artist to Watch” in The Atlantic. Learn more about Cécile on NPR’s “All Things Considered” and “Fresh Air,” New York Times’ “Close at Hand,” or watch her perform on BBC’s “Later… with Jools Holland” and PBS’ “The Tavis Smiley Show.”

"
15-12-2017 Jazzism
"Cécile McLorin Salvant is a performing animal and that is why she really wanted to release a live album. With Dreams And Daggers, the American vocalist presents a double-album full of textual layers and a studio contribution from the Catalyst Quartet. "Text is the heart of music for me.""
01-12-2017 Dr Jazz
"Dreams And Daggers has become a beautiful album and therefore, despite the somewhat clumsy quasi-artistic and hard to read booklet, highly recommended!"
27-11-2017 Dagblad de Limburger
"Damn little is to be seen on the new live double of this voice artist."
07-11-2017 Rootstime
"Whether it's a standard or an "slanted" blues number, everything goes smoothly"
01-11-2017 jazzhalo
"Between dreams and disillusions, the 23 songs on this double album placed under a double theme: the black American identity and the status of women in her search for love, but will, in its own words, "to connect interactive songs"."
23-10-2017 NRC Handelsblad
"She sings herself without any means in the center of attention."
23-10-2017 Jazzenzo
"Great and with natural enthusiasm, she provides the Great American Songbook with new insights, with a unique voice whose possibilities seem inexhaustible."
17-10-2017 Mad Jazz
"This album is great, you have to listen to it!"
13-10-2017 De Volkskrant
"Technically perfect, but still a bit raw and at the right moments feature a frayed edge!"
12-10-2017 Mania
"The Florida-born singer and pianist Cecile Mclorin Salvant is one of the most talented jazz vocalists of the last few years."
11-10-2017 JazzAround
"With always that great sincerity that characterizes her, this unique voice and a sense of dramaturgy that is her own."
06-10-2017 Written in Music
"McLorin Salvant is all style and class"
28-09-2017 CÔTÉ MAG
"Cécile McLorin is one of the great voices of jazz."
21-09-2017 Lesuricate
"Once again, Cécile McLorin Salvant shows that she knows how to sing with her beautiful and unique voice."
20-09-2017 JazzNu
"Cécile McLorin Salvant once again great jazz diva"
19-09-2017 Jazzenzo
"McLorin Salvant can join the line of the great jazz diva's of old times."
15-09-2017 Jazzism
"The singer is widely praised as the vocal jazz promise."
15-09-2017 Jazzism
"... man this woman can sing. Heavenly!"
le surrucate ( online)
"Ces enregistrements en club reflètent une ambiance intimiste et une belle connivence avec le public, le tout avec une très bonne qualité sonore."