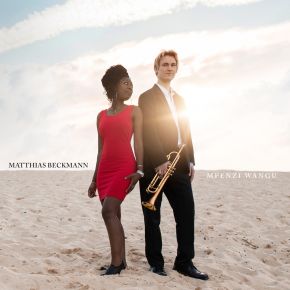 MPENZI WANGU is the title of the debut album by young trumpet player and composer, Matthias Beckmann. The title is Swahili, but anyone expecting a pure world music album will be left amazed right after they've hit the play button... MPENZI WANGU means "my darling" in English, and yes, it radiates the temperament, energy and African vitality which we associate with Tanzania. It's also dedicated to a lady who means a great deal to the creator of this work. In other words, it's a very personal album.

Yet even with the intimate subject matter, musically it pulls out all the stops, especially in its African stylings. It's an album which moves nimbly and light-footed, almost dancer-like, between a club sound and traditional jazz. Elements of funk, latin, rock, blues, soul, R&B, disco and pop fall naturally into place. They combine to form an amazing blend that makes you sit up and listen. It's a complex mix which also provides for lasting vitality and thrills in inter- personal relationships as well.

Matthias Beckmann provided the compositional framework, ideas for the arrangement, and the mood for each of the individual pieces. The seven fantastic musicians then polished them together and made them dazzle.

Matthias Beckmann (trumpet, flugelhorn), Mark Lucassen (saxophone, flute), Alexander Lipan (guitar), Max Teschner (keyboard, hammond C3), Julian Walleck (bass), Andreas Hermjakob (percussion), and Dominik Hahn (drums), have known each other since they studied together in the Netherlands, both at the Royal Conservatory in The Hague and at the ArtEZ Conservatorium in Enschede.

It's a septet which makes full and brilliant use of its tonal variety – where every musician has the chance to shine, without ever needing to compete with each other.