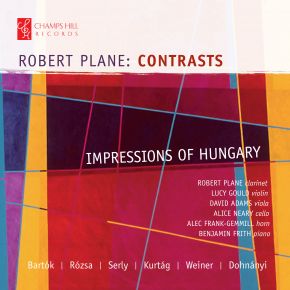 We are so used to the gritty and astringent style of Béla Bartók (1881–1945) that it is often overlooked that he started from a musical and aesthetic background very similar to that of his apparent polar opposite, the precociously gifted but ’’ conventional Erno Dohnányi (1877–1960). Indeed, the two attended the same Catholic grammar school in Pozsony (now Bratislava in Slovakia), Dohnányi just four years ahead of Bartók, and both pupils played the organ at the church attached to the school. Bartók was very conscious of the early and spectacular success enjoyed by Dohnányi, whose piano quintet, written while still a student at the Budapest Academy of Music, so impressed Brahms that the German composer helped arrange for its premiere in Vienna; after graduating, Dohnányi became almost instantly an international success, performing Beethoven’s Fourth Piano Concerto in London’s Queen’s Hall under the baton of Hans Richter. Bartók hoped to emulate this success, and while in his teens composed several Brahms- influenced works including a piano quintet written just two years after Dohnányi’s. He also greatly admired Dohnányi’s piano playing, and took lessons with him; their relationship was sufficiently cordial for Dohnányi to conduct several of Bartók’s early works.