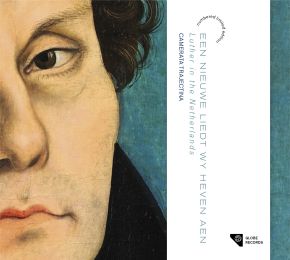 The title of this album comes from the first song Luther wrote. In this recording Camerata Trajectina highlights Lutheran melodies in the Low Countries in the 16th century. In this way the ensemble commemorates the 500th anniversary in 2017 (on October 31) of the day when Luther publicly posted his 95 Theses in Wittenberg, which sparked the Protestant Reformation.

03-11-2017 Luister
"Compliments to all singers, who are literally understandable"
03-11-2017 Mania
"The album gives a beautiful image of time with narrative (protest) songs and Lutheran psalms."
28-10-2017 Stretto
"Exceptionally enriching and very original. Highly recommended."
27-10-2017 Kerk & Leven
"It has become a unique CD containing the music from the first century of reformation in the Netherlands."
01-04-2017 Tom Magazine
"Completely according to the sophisticated pattern that we know from Camerata Trajectina: the recordings always tell a story and are much more than just a large number of separate short pieces."