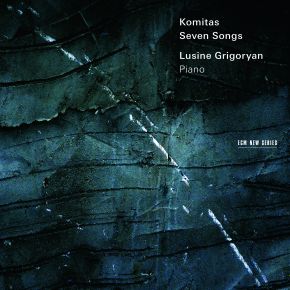 Complete in itself, this solo piano album by Lusine Grigorian, can also be considered a companion volume to the Gurdjieff Ensemble’s critically-acclaimed album of Komitas’s music. It was recorded at the same 2015 session in Lugano, directed by Manfred Eicher, and has some overlapping of repertoire. Where Levon Eskenian’s versions with the Gurdjieff Ensemble explored some of the composer’s sonic inspirations with folk instruments, Lusine Grigorian conveys some of the same colours with her wide palette of piano articulation and her exploration of timbral possibilities: in her playing one can catch the flavour of the duduk, the tar, the zurna et cetera, as Komitas intended. As Levon Eskenian has noted, Grigorian “conveys the mysterious presence typical of rustic and ritual music.” Pieces heard on this recording, the ECM debut of Lusine Grigorian, include Komitas’s Seven Songs, Seven Dances, Pieces for Children, and Msho Shoror.

09-10-2017 Crescendo
"Music is often delicate. Most of the pieces are short, or even very short. They appear to us as a bouquet full of charm. A disc so very seductive.
Sound 10 - Booklet 8 - Repertoire 9 - Interpretation 10