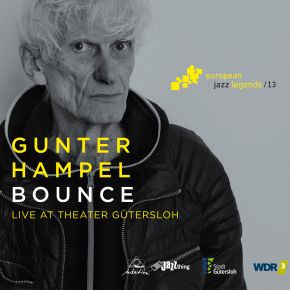 Music is a timeless force, constantly ebbing and flowing, a steady sea of sound. At once reliable and unpredictable, there are few people who personify the ever changing and evolving nature of music – of Jazz in its freer forms in particular – better than Gunter Hampel. Going on eighty at the time of this live recording from a concert at the Theater Gütersloh on June 17, 2017, he plays bass-clarinet, vibes, flute and saxophone, and contributed all of the compositions here. “It is important to never stop learning, to stay curious”, he says during the interview at the end of this album. “And that’s why the joy never left – and then you get to be so old doing this.”

Born in Göttingen, Germany, Hampel has been living and playing Jazz around the world for more than seven decades, befriending and recording with likeminded masters such as Anthony Braxton, Marion Brown, Steve McCall, Leo Smith, John Tchicai, Archie Shepp, John McLaughlin, as well as Miles Davis, Charles Mingus, or Thelonious Monk. “Jazz music exists in this world, so that things become clear”, he says, and demonstrates this in a diverse and dynamic set that playfully bounces from Bebop to Hip Hop via Orff-ian Folkestry, referencing the sonic concepts of Charlie Parker’s “Billie’s Bounce” as much as Big Sean’s “Bounce Back”.

The concert starts from the back, literally, with Hampel and his “Berlin-New York Quartet” with Johannes Schleiermacher on sax and flute, Bernd Oezsevim on drums, and his daughter Cavana Lee-Hampel on vocals, entering the venue from the rear of the auditorium and making their way to the stage in a Conga line to the aptly titled “Kindred Spirits”. “Musically I prefer that you don’t have to fight for your space, but also listen to the other players”, Hampel notes. “In the end it is the spiritual value that determines whether something stays with the listener or not.”  Götz Bühler