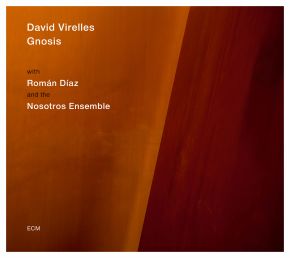 In this vivid and exciting project, the Santiago-raised and New York-based pianist-composer David Virelles looks towards one melting pot from the vantage point of another. A far-reaching work with deep cultural roots, Gnosis speaks of transculturation and traditions, and of the complex tapestry of Cuba’s music – the sacred, the secular, and the ritualistic – but the work’s shapes and forms could only have been created by a gifted contemporary player thoroughly versed in the art of the improvisers. Strings, woodwinds and percussion all have their roles to play in Gnosis, viewed by Virelles as “several families functioning within one unit: this dynamic symbolizes multicultural interaction.” Virelles’ responsive piano and the vocals and percussion of Román Díaz, a profound figure in the transmission of Afro-Cuban musical history, are at the centre of the action. Gnosis was recorded at New York’s Avatar Studios in May 2016 and produced by Manfred Eicher.