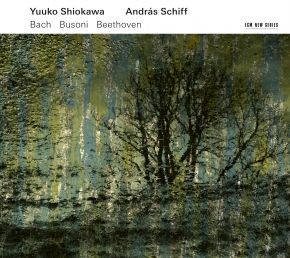 Yuuko Shiokawa and András Schiff are heard here in an insightful programme of sonatas for violin and piano which begins with Bach’s Sonata No.3 in E major, ends with Beethoven’s Sonata No.10 in G major, and has at its centre Busoni’s Sonata No. 2 in E minor. As on their earlier and widely-admired recording for ECM (featuring Schubert Fantasies), Shiokawa and Schiff play the music with absolute authority and deep understanding.

Most of Johann Sebastian Bach’s chamber music was written in the period 1717-1723, when he was employed as Kappellmeister at the court of Cöthen. Bach wrote six violin sonatas, with the E major sonata standing apart from its companions, as Misha Donat notes in the CD booklet. “Of the two Adagios, the first, with its elaborate violin cantilena, is like the slow movement of a concerto…In the hauntingly beautiful c-sharp minor second slow movement, the melody is shared equally between the two players, at first alternating and then proceeding in contrapuntal dialogue.” The second allegro, meanwhile, is a “dazzling display piece unfolding in a vertiginous stream of semiquavers.”