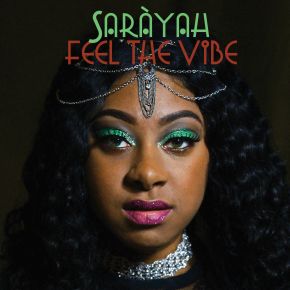 Saràyah, a young vocalist and artist out of New Orleans, LA, is poised to make her mark on the pop music scene. Spurred by the support of a musical family, after years of performing and honing her skills in various groups in New Orleans, and under the direction of manager, T.A. Charlot, she has partnered with record label Basin Street Records to create her debut album Feel The Vibe. On the album she demonstrates her talent not only as confident vocalist but also as a skilled songwriter, penning lyrics to nine original songs.

She carves her own niche in the pop music world by incorporating a polished voice with elements of club/dance music, worldbeat, Caribbean inflections (reflecting her roots performing in New Orleans groups), and R&B to form an Ariana Grande meets Rihanna meets Kehlani sound. Citing Rihanna and Bob Marley as influences, she is primed to follow in their footsteps to rise through the ranks of various music charts and establish herself as a leading crossover artist.

The leading single from Feel The Vibe “Give Me Love” combines a heavy club beat with subtle trumpet accents and introduces Saràyah to the world as the versatile vocalist that she is with breathy, ethereal calls in Spanish contrasting effortless syncopated verses featuring her understated Caribbean accent. Listeners will begin to feel the vibe of the album after hearing “That Vibe”. “Fire & Ice” finds her voice in its full pop element over a sultry beat with an unforgettable hook in the chorus. “We Party” will find its home at the VIP tables and rooms of clubs across the world, and when club goers are ready to hit the dance floor “Gimme Dat Work” will not disappoint.

Feel The Vibe will release worldwide on all major music services and from BasinStreetRecords.com on October 27, 2017, but keep an eye out for the single “Give Me Love” September 1.