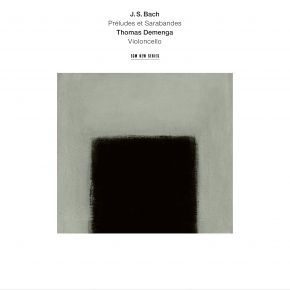 Swiss cellist Thomas Demenga returns to Bach’s Suiten für Violoncello, masterpieces of music. “To me, Bach is the greatest musical genius who has ever lived,” says Demenga. “His music is pure, sublime… It possesses something divine and each musician has a lifetime in which to discover new ways of interpreting it.”

The present recording, made at the Hans Huber Saal in Basel, is Demenga’s second reckoning with the cello suites on ECM. He previously recorded them between 1986 and 2002, juxtaposing them with contemporary composition (by Elliott Carter, Heinz Holliger, Sandor Veress, B.A. Zimmermann, Toshio Hosokawa and Isang Yun) in a series of albums which count as milestones in the early history of the New Series. (Elliott Carter wrote that he had “never heard the Bach C Major suite played so understandingly and so convincingly.”)

With Bach, the committed interpreter must always approach the music’s challenges anew:
“I think I’m speaking for most musicians when I say, that especially with such monumental works as the Bach Suites, there is always a desire to do better, to do justice to the content of the music: to present the preludes ever more simply and clearly, and to make the dances more dancelike and more graceful. The eternal search…”

Many years of playing and studying every aspect of the pieces, from source manuscripts to different tempos, embellishments, fingerings and bowings, have brought Demenga to the heart of the music – which Bach himself described as the only goal. The quality of tone production is crucial of course and, for Demenga, this is also a tactile issue: “To interpret Bach’s works as truthfully as possible,” he feels, “it is essential to play with gut strings and a baroque bow. The cello does not have to be rebuilt in the baroque manner – a modern instrument is able to capture the sound just as well. Playing on bare gut strings, however, goes a step further. The tone quality of a baroque string has something ‘wooden’ and archaic: even the bowing of open strings presents a whole new sound world. I always get the feeling that Bach is gazing over my shoulder with his kind, yet strict expression.”

Simultaneously with the 2-CD set of the Suiten für Violoncello, ECM is issuing a vinyl album – Préludes & Sarabandes – with selected movements from the suites.