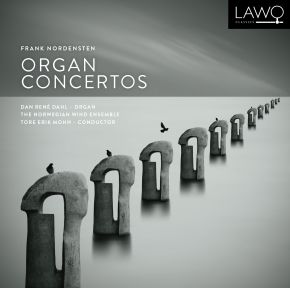 FRANK NORDENSTEN (b. 1955) started composing at the age of 12, earning accolades as both performer and composer in his teenage years. His impressive collection of LPs accompanied by their scores bear witness to a remarkably meticulous regime of self-study. He started his formal music education at the Norwegian State Academy of Music in 1975, initially a Bachelor's degree under the instruction of Søren Gangfløt (organ), Hans Solum (piano) and Ketil Haugsand (harpsichord). In 1979, he embarked on a composition class under the inspiring and encouraging tutelage of Finn Mortensen. Nordensten (who himself claims to have ‘conductive’ fingers) also established his own production studio for electronic music, and through this has been both a successful studio technician and record producer, continuing to be a key player in the field of digital music notation.

Nordensten has composed works in most genres, with the most notable amongst these being the chamber work Ricochet, Violin Concerto No. 1, Symphony No. 2, the ballet Grieg ajour (Bergen International Festival 1993, The Norwegian National Opera and Ballet 1994), 24 Preludes and Fugues for Piano, as well as the symphonic epos Masada. Organ works play a central role in his output, prolonging the streams of the Central European symphonic organ tradition. He has premiered several of his own organ works. In his capacity as solo pianist he has also premiered his Piano Concerto No. 2 with wind ensemble Norske Blåsere as well as Piano Concerto No. 3 with The Norwegian Wind Ensemble.

What is the inspiration behind the two organ concertos on this CD?
Both the organ in Fredrikstad Cathedral and the large Jørgensen Organ in Glemmen Church helped shape me musically. The organ in general is probably the instrument that fascinates me the most, and it’s the one I always gravitate back to. The first (Concerto No. 2), is a virtuoso dialogue between the organ and the orchestra, with a purely instrumental approach. There is no deep philosophical attempt to create any illusions here. This is more a case of absolute music leaping out of the intrinsic possibilities of the instruments and the space.

Concerto No. 3, on the other hand, is inspired by the prevalence of time. I have alluded to the size of the universe through the titles of the movements – Venus, Satellite etc. It is an attempt to create an atmosphere for the listener, taking them into a more timeless dimension. The short texts are based on some of the small aphorisms by my good friend, the entrepreneur and amateur poet Rolv Møll Nilsen. Stylistically, the two concertos are not very dissimilar, even though the musical expression is very different. For instance, the way I construct the harmony is the same. This is, in many ways, ”old-fashioned" music. Contemporary music seems to be largely inspired by abstract and intellectual scenarios, whereas my inspiration is always emotional. My motivation is communication and I always strive to communicate on a level that can be universally recognisable.

At the edge of time
As the sea meets land
As all that’s to come meets all that has been
You meet me
When time kneels humbly at the feet of genesis,
When future turns to past
You stand and place the moment in my hands
Time is the sole face of God.