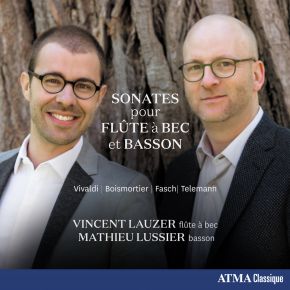 The start of recorder soloist Vincent Lauzer’s career was meteoric. Winner of several prizes in national and international competitions, Lauzer was awarded the Fernand-Lindsay Career Award in 2015, First Prize at the 2012 Stepping Stone Canada Music Competition, and the Career Development Award from the Women’s Musical Club of Toronto in 2012. Révélation Radio-Canada 2013-2014 and Breakthrough Artist of the Year at the 2012 Opus Awards, recorder player Vincent Lauzer graduated from McGill University. His first solo CD was released in September 2013 on ATMA Classique. He is the artistic director of the Lamèque International Baroque Music Festival in New-Brunswick.

Mathieu Lussier has energetically and passionately promoted modern and baroque bassoon as solo instruments throughout North America and Europe for nearly two decades. He devotes considerable time to chamber music as a member of ensemble Pentaèdre de Montréal. His numerous solo recordings include  more than a dozen bassoon concertos (Vivaldi, Mozart, Fasch, Graupner, Telemann, and Corrette), an album of bassoon sonatas by Boismortier, three albums for solo bassoon by François Devienne, and two albums of music for winds by Gossec and Méhul. Mathieu Lussier is in demand as a guest conductor in Canada and abroad. Appointed by Les Violons du Roy as Conductor-in-residence in 2012, and Associate Conductor in 2014, Lussier has led the orchestra in numerous programs both in Quebec, and on tour across Canada, the United States, and Mexico.