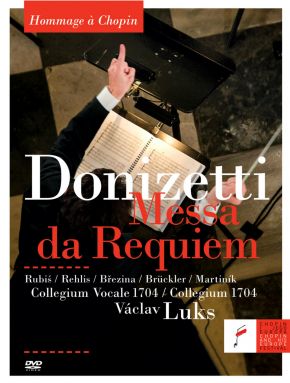 This DVD is part of the cycle ‘Romantic Requiem’, presenting recordings of funeral masses by nineteenth-century composers, which, performed at the Holy Cross Basilica in front of Chopin’s heart, represent a singular tribute to the great Polish composer.

‘Donizetti’s religious musical language evokes the atmosphere of works by Monteverdi, is akin to the sacred compositions of Rossini and inspired the later funeral mass by Verdi— that is a tribute worthy of the divine melodist Bellini’.

Recorded at the 12th International Music Festival CHOPIN AND HIS EUROPE [From Mozart to Bellini] at the Basilica of the Holy Cross in Warsaw, 19th August 2016