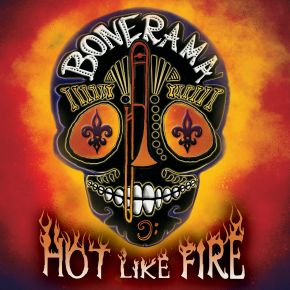 After four years since their last recording, New Orleans Brass & Rollers, Bonerama return with their seventh album Hot Like Fire on October 6, 2017, their first to be released by independent music powerhouse, Basin Street Records.

Formed in New Orleans in 1998, by trombone players Mark Mullins and Craig Klein (who from 1990 -2006, were also members of Harry Connick Jr.'s big band), Bonerama bills itself as a brass/funk/rock band but Bonerama is much more than that. Bonerama is a New Orleans musical institution. They are one of the most genuine, unique and interesting bands to have ever come out of the Crescent City. Bonerama incorporates jazz, brass, funk, fusion, soul, pop, rock, blues, a touch of alternative and even a bit of reggae into its one-of-a-kind sound. Three trombones front the band, plus a sousaphone, guitar and drums all delivering a powerful sound that you have to hear to believe.

Hot Like Fire finds Bonerama developing its dynamic, high-energy, fun, happy and bold moods further than ever before. The New Orleans stalwarts deliver nine wonderfully brassy musical landscapes--seven of which are original compositions (including the concert staple "Mr. Okra") along with powerful covers of Radiohead's "Paranoid Android" and the late Allen Toussaint's "Basic Lady."  The album was produced by Mark Mullins, Craig Klein and Tracey Freeman and recorded at Music Shed Recording Studios in New Orleans.