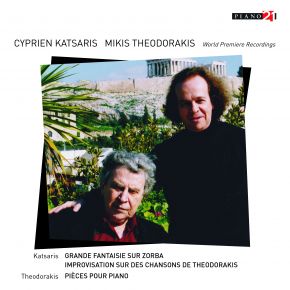 In the early 80s I started thinking about composing a piano work of about 12/14-minutes based on the soundtrack of the movie Zorba the Greek somewhat in the style of what Franz Liszt had done with his popular Hungarian Rhapsodies. In the 90s I received from the hands of Theodorakis the music score of his ballet Zorba which had been commissioned by the Verona Festival in Italy and in which he also included additional music after having spent 8 months on the new manuscript at his Paris flat. I read carefully that new score and was so impressed by its musical quality that I intended to expand on my first idea. Completed in January 2007, this piano composition finally lasts 53 minutes and I intend to dedicate it to the Greek People.

However, the piece is exceptionally difficult to learn and to perform: every time I opened my manuscript to start working on it, I found myself in no time having to leave it once more. In the spring of 2017 I managed at last to complete this project. In addition, I also recorded a Spontaneous Improvisation on some of the most popular songs of Theodorakis which lasts about 15 minutes and I added a few of his original piano pieces in order to present several aspects of his musical genius.

French-Cypriot Cyprien Katsaris has a long-standing relationship with Greek composer Mikis Theodorakis, and in his 53-minutes-long Zorba Fantasy he develops an idiomatic feeling for the particular rhythms and colours of the music. Katsaris’ own music as well as the small pieces by Theodorakis are most brilliantly played.