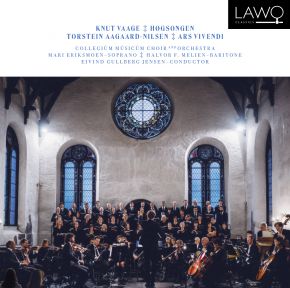 The composer about the work:
"In 1999, Norwegian poet Georg Johannesen wrote the collection of poems Ars Vivendi - eller de syv levemåter (eng: Ars Vivendi - or the seven virtues of life). The structure of this collection is organised into weeks, one week for each of the seven virtues. I have chosen one weekday to correspond to each of the virtues, a total of seven poems which became seven movements. This work is dedicated to my wife, Hege."


HØGSONGEN (2009)
FOR TWO SOLOISTS, CHOIR AND ORCHESTRA
KNUT VAAGE
TEXT: FROM SONG OF SONGS.
The work was commissioned by Collegiûm Mûsicûm

The composer about the work:
"A few years ago I was pleased to have a new piece of work commissioned for Collegiûm Mûsicûm. From the outset it was clear that I would use the text  from Solomon's Song of Songs, especially in light of the fact that I had the opportunity to realise a major work using the church as the performing arena. Hence the title Høgsongen (eng. Song of Songs), a piece written for choir and orchestra with soprano and baritone soloists.

A considerable amount of time was spent editing the text before composing began. The entirety of Solomon's text would have been far too long to fit within the framework of the piece, so I chose some excerpts while adhering to the dramaturgical sequence of the text and endeavouring to be faithful to the essence and character of the text.

I interpret the central message of Solomon's Song of Songs as a coherent, extravagant celebration of love. The text is such a poetic force that it posed a challenge to set it to music with a comparable level of intensity. This feeling of humility initially prevented me from getting started with the composition, but a residency at the Circolo Scandinavo in Rome in the autumn of 2008 set the wheels in motion. The plethora of sublime churches in Rome provided a magnificent setting for the writing process and on most days I managed to find some time in them for some quiet reflection.

The fundamental component of the work is a type of new-impressionism based on mosaiclike form elements which are repeated throughout. Recognisable moods in the text were placed into this mosaic with single musical statements repeated and then varied, emphasising the work's form. The piece owes its extravagance and any sense of inventiveness to Solomon’s original writings, with the performers further enhancing this mood.

My attitude has therefore been to let the text unfold and allow it to draw us in to this homage to love. This is how I have approached this biblical text, which holds a special position in world literature, and which I believe has not received anywhere near the attention it deserves."

The two Norwegian works for choir, orchestra and two soloists on this disc are moderately modern. The performances are very sympathetic.