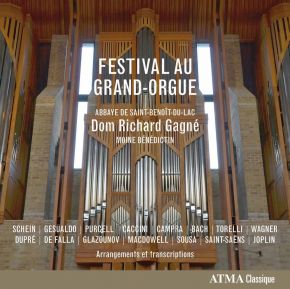 The album Festival au Grand-Orgue features organist and Benedictine monk Dom Richard Gagné in a wide range of pieces by various composers: Gesualdo, Purcell, Bach, and Scott Joplin, among many others. The works reflect diverse instrumental groupings and have been adapted and transcribed for the organ, the "Instrument of a Thousand Voices." The album was recorded at the Benedictine monastery of Saint-Benoît-du-Lac Abbey on a Karl Wilhelm organ.

Dom Richard Gagné entered the Abbey of Saint-Benoît-du-Lac in 1976 and was ordained a priest there in 1984. While pursuing his monastic and theological training, he was mentored on the organ by Dom André Laberge, and received the greater part of his training in improvisation with Raymond Daveluy.