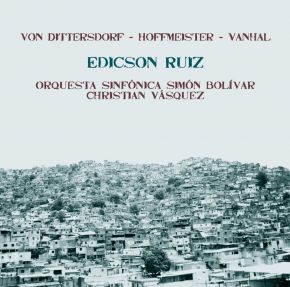 The VIOLONE, a Baroque bass viol which reached the apogee of its development in the mid-eighteenth century, was the dominant bass string instrument right up to the age of Beethoven, when the demand of symphonic composers for a much fuller and more dramatic sound put an end to its ascendancy. Edicson Ruiz decided to turn his attention to the repertoire of the pre-Classical period, for which he was able to draw on a range of historical instruments. On this recording of three concertos by Carl Ditters von Dittersdorf, Franz Anton Hoffmeister, and Johann Baptist Vanhal. Edicson Ruiz follows the last great solo violonist Johann Hindle (1792–1862) by playing a four-stringed instrument with historical scordatura tuning.