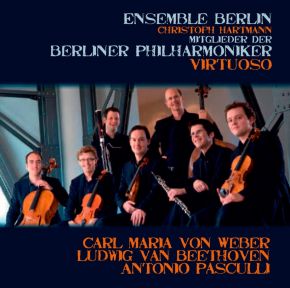 With "Virtuoso" the BERLIN ENSEMBLE is presenting its second CD on Philharmonie after Ravel & Mussorgsky. In 1999 musician friends of the Berlin Philharmonic Orchestra founded a festival of chamber music, the Landsberger Sommermusiken. Afterwards the musicians decided to continue playing chamber music together and that was the birth of the Berlin Ensemble. Meanwhile the ensemble has earned an excellent reputation on the international concert stage. They played concerts in Japan, China, Brazil, the USA, Italy, Austria, the UK, Iceland and Spain. The Ensembles' instrumentation of oboe, bassoon and string quintet offers an interesting mixture of wind and string instruments. They perform original compositions as well as adaptations. Thanks to the collaboration with oboist and arrangeur Wolfgang Renz a whole series of musical jewels has been created. This recording contains two adaptations of him. In addition to their playing in the orchestra, the festival Landsberger Sommermusiken is a constant source of inspiration to the Ensemble Berlin. Here is the place for both: improvement and experiment. The BERLIN ENSEMBLE was quite evidently really enjoying the music they were playing in concerts and recordings. You can even hear it! Listen!