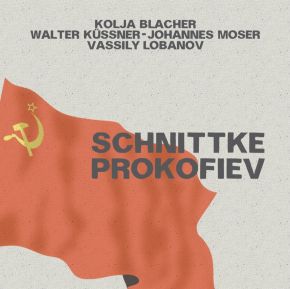 The composer Alfred Schnittke felt at the same time German, Russian and Jewish. He himself saw a connection between his 'poly identity' and the orientation of his works. His string trio in two movements was created as a commission for the Alban Berg-Society in 1985 for what woulkd have been the 100th birthday and 50th anniversary of Berg's death. It is structurally based on seven thematic components, that range between changing colours and forms. At the same time the moods vary from friendly to gloomy, from sensous to shocking. Next to estactic-sensous broken chords and funeral march-allusions, a slow waltz motif becomes great importance, that can be understood as a homage to Vienna. Sergei Prokofiev's Violin Sonata No. 1 in F minor, Op 80 is one of the darkest and most brooding of the composer's works. He started notating the initial themes in 1938, but the invasion of the Germans, and the evacuation interrupted his work on the project. Meeting David Oistrakh, the leading violin virtuoso in the USSR, put him back on track. In the autumn of 1946, Oistrakh, to whom the first Sonata is dedicated, and his regular piano accompanist Lew Oborin presented the work, the result of a turbulent 8-year incubation period, under direction of the composer. The 'Five Melodies' Op. 35a were initially vocal pieces, 'songs without words' literally. Prokofiev made use of the opportunity to experiment with the techniques and tonalities of a human voice, which would be treated like an instrument.