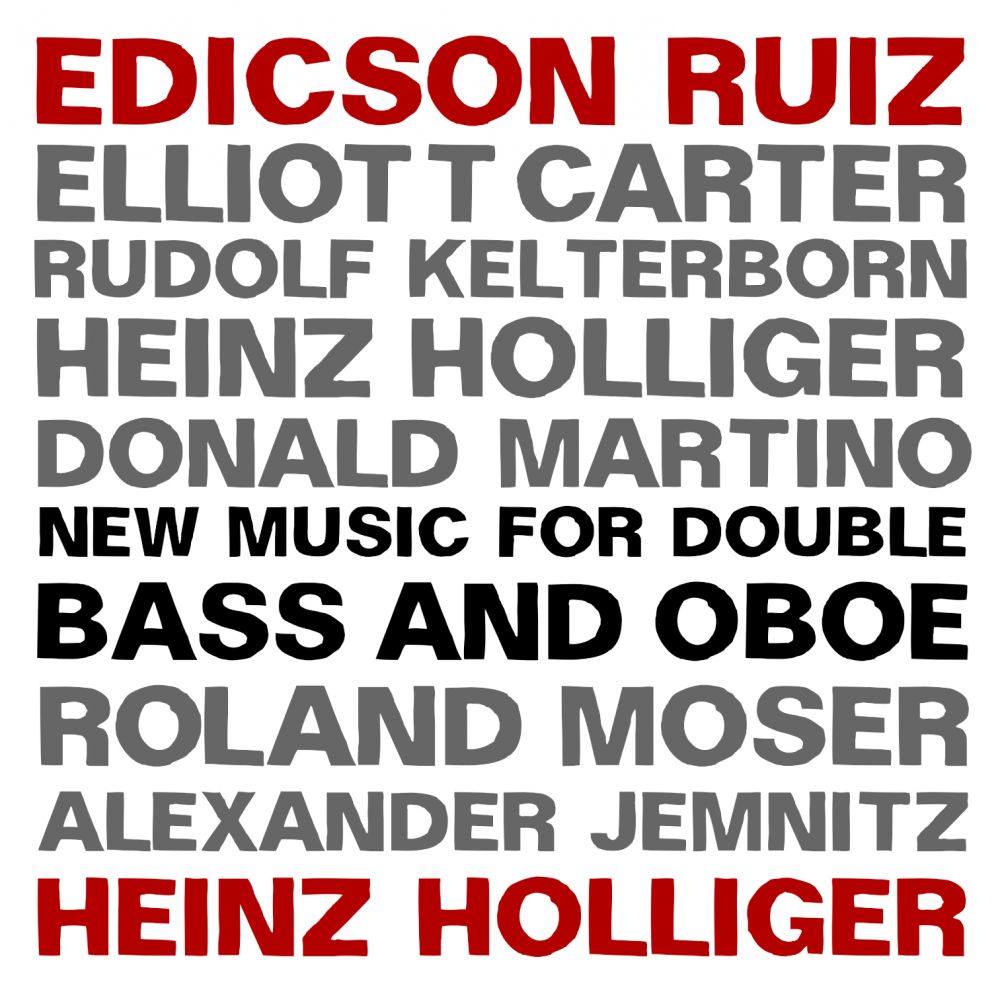 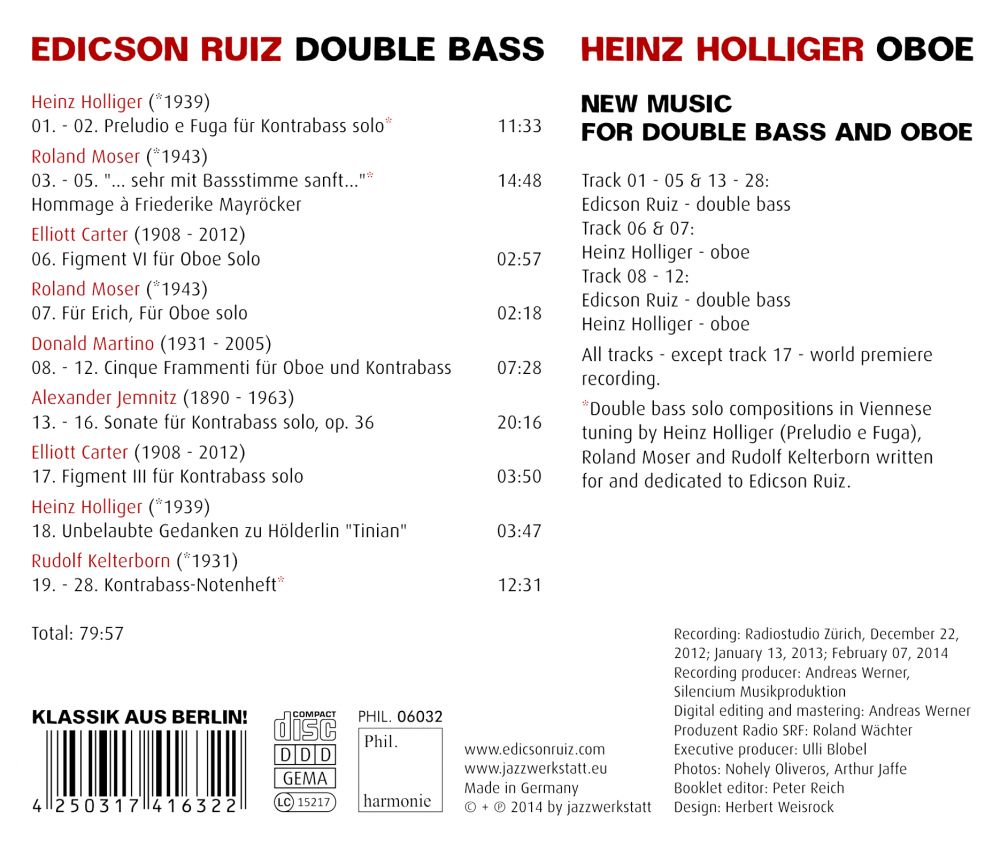 The double bass continues to possess a certain terra incognita. Although there are a few well-trodden paths: Familiar are both the traditional accompanying role that the instrument plays in classical repertoires, in jazz, and folk music, as well as the ex-treme virtuoso, often acrobatic dexterity required of a musician when the double bass takes on a solo role on the concert stage.

Between altruism and egoism lies, not a fine line, but rather a huge jungle-like sprawling continent, of which, with the exception of few brave pioneers, almost no one has knowledge. One of the exceptions is Edicson Ruiz, who over the last few years has made fascinating discoveries there, which have served as both the inspiration and provocation of new musical concepts. What drew him in was something known as "Viennese tuning" (A1-D-F#-A), a historic solo scordatura that enjoyed popularity during the Classical Period in Vienna, but which has long since fallen out of fashion. The "Viennese tuning" which Heinz Holliger, Rudolf Kelterborn and Roland Moser adopted to create new compositions for Ruiz, allows for an especially transparent sound, a more flexible handling of the instrument, special qualities of resonance and, above all, unprecedented flageolet playing.

Ever since Beiseit (1990/91), we know that Heinz Holliger (born in 1939) has a strong interest in the other side of double bass. In this vocal cycle which was inspired by the poetry of Robert Walser, a Ländler trio plays "inverted folk music" with a bass that seems at times to have been transformed into an instrument of torture. The solo piece unbelaubte Gedanken zu Hölderlins "Tinian" for a five string double bass (Edicson Ruiz plays this piece here in a new version for four strings) is based on a poetic impulse: Holliger had just finished reading Tinian-Fragments when he wrote the music while traveling on a train (from Zurich to Basel in the company of a Hölderlin researcher on April 14, 2002). In 1804, Hölderlin imagines the South Seas island of Tinian as οὐ-τόπος "holy wilderness," "Full of fragrance / With summer birds," pre-sented as an aesthetic ideal that is "prepared only for what they are," "leafless / thoughts." It is from this very same sweet island that the American bombers set off to incinerate the cities of Hiroshima and Nagasaki in the summer of 1945.

Responding to the fragment with an immediate reflex, Holliger hastily wrote eleven loose lines of dark song which breaks into the flageolet melody several times ("Coun-terlight in our days"). The double bass as a sound prism: In Preludio e Fuga, the instrument fulfills this function to a much more extreme degree, when the prelude's "unreal glimmer of sound" (Holliger) succumbs ever more to the reality of the deep bass notes (open fourth string A1) and builds up within it before scattering into four separate voices in the fugue. It is a music of passages and transitions, where the sound regions between the variations are given an opportunity to flourish. The musi-cian is confronted by an insanely complex, heavily reflected and obscured compo-sition style that is never totally uncoupled from a declamatory basic attitude. The resolution of complexity at the very end reveals Holliger's own variation of the "Viennese tuning" (A1-E-G-B).

In his music, Rudolf Kelterborn (born in 1931) cultivates a proclivity for night sounds. For this, the double bass serves as an important acoustic medium, both as an ensemble instrument (Nachtstücke, Sinfonien IV & V), or in duet with the cello in Notturni from 1982. These musical works are usually sustained by a sensitivity to sound and lucidity that is unable to unfold in the new Kontrabass-Notenheft. The first piece, Andante grave, as brutal down-bow music derived from individual impulses and sound breaks, is not an ideal introduction to subtle unencumbered solo elabo-rations. In fact, for the remainder of the music composition, it fails to sing out freely and attain a full sound. Whereas in the second piece, Fuggitivo, the Melos never succeeds in asserting itself effectively, in the third piece, Canto esaltato, it seems overly dramatic; a Phantasma (fourth piece) brings forth sweeping overtones and a melismatic whirring that runs loosely alongside the pulsating basic theme; the final Presto violente allows for spectacular showing-off, but in powerful exaggeration, remaining almost completely in the low register of the orchestra; five additional so-called Ein-Fälle follow as a cumbersome fragment or futile gesture between the main sections.

Kelterborn sees not only the elegant side of Ruiz' playing on this specially-tuned instrument. He provides not only a positive demonstration of extraordinary skill on the bass. Blockades and unreconciled situations are also created that expand the field of possibilities. The result is a collection of moments, briefly powerful and exalting, quickly fleeting and extinguished (the richness of relations between the many iso-lated and fragmented varied tones also achieves a cyclical perspective) – a Kontra-bass-Notenheft, whose innocuous title tends to misrepresent the contrariness of its content.

Roland Moser loves the play of quite elementary constellations. The new double bass piece "... sehr mit Bassstimme sanft ..." is another example of what can be achieved through an extremely clever handling of raw material and physical conditions such as open strings or the number of fingers on a hand. By slightly altering the "Viennese tuning" Moser has all the strings tuned to so-called natural intervals so that they correspond with the attainable upper tone relations on the individual strings. A coherent and consistent system is created that enormously enriches the tone-color melody and fine distinctions. A unique light, floating music comes to the fore, defying the usual expectations of harmony and disharmony.

Naturally, not everything in this music is consistent. Moser's love of contradiction would never allow for that. In the second piece, Fünf Berührungen – actually a small cycle of its own – the playing hands increasingly and pointedly influence the basic constellation. The piece is an homage to Friederike Mayröcker, whose poem Mein Arbeitstirol is recited in the final "Berührung" – not by the voice but by the double bass. Central key elements appear here: the "small intervals between the tongues", the "likeness to language," the "mirror of breath," all of which are achieved through musical means. The "plot" proceeds playfully to the Trotz-Walzer with its repertoire of cryptic sublime banalities (a "thought shadow" even appears for György Kurtág with a reference to "Hinz und Kunz"), which in Trio intimo briefly returns to the soundscape of lighter "Berührungen." A second composition by Moser on this CD is a more somber "music as speech" piece for the oboe: Für Erich, a dirge to the death of Heinz Holliger's brother, who died in 2010.

These new compositions written for Edicson Ruiz by Heinz Holliger, Rudolf Kelterborn and Roland Moser illuminate a few new landing points on the dark continent of the double bass. Of course they are not totally without presuppositions, a fact demon-strated by a few of the previously unknown historical works on this CD, which (with the exception of Elliott Carter's Figment III) are recorded here for the first time. The Cinque Frammenti (1961), written by Donald Martino (1931–2005) for oboe and double bass, manifests an encounter: The work is dedicated to two superb American protagonists of contemporary postwar music: Josef Marx "with his fire Hoboe" (Stefan Wolpe) and Bertram Turetzky, who rediscovered the double bass as a solo instrument and initiated what is by now an overwhelming number of new compositions. The fragments, however, are anything but a spectacular celebration of these pontifical interpreters or display of their extraordinary abilities. The music has no immediately obvious Salti mortali to offer. It is instead a highly differentiated intimate dialogue leaning towards introspection in a rare constellation of oboe and bass that appears to be structured by a few merging points. Martino internalized the serial technique and music writing process into the free declamatory composition-style of these frag-ments, calling to mind his tutelage under Luigi Dallapiccola. But are these really "fragments"? They certainly don't seem fragmentary, as they are characterized by a generous time articulation and spaciousness out of which the duo partnership is able to express itself. In the fourth fragment, a brief condensation evolves into a very quietly played "il più presto possible" pattern, which quickly reopens into a relaxed Allegretto.

Particularly at these moments, the strong flexibility of thought in this discursive art of composition becomes evident. The balance between structural complexity and free-form expression shows a certain affinity for Elliott Carter (1908–2012). This basic attitude manifests itself especially in Carter's Figments; "Hirngespinsten" provides instrumentalists the opportunity to demonstrate their skill at mental polyphony in solo playing. This work series is concluded by Figment VI, which Elliott Carter wrote for Heinz Holliger in 2011 (at the age of 103!).

"The works of Sándor Jemnitz (1890–1963), who propagated and imitated the art of Arnold Schönberg, were also patterned after a foreign model." This is the only mention of Sándor Jemnitz in László Dobszay's A History of Hungarian Music (most Hungarian music histories make no mention of him at all). The sentence shows his glaring outsider role as a composer, although as a writer on music he was as an important authority in Hungary. He did, in fact, study composition privately with Arnold Schönberg in Berlin from 1913 to 1915 (and before that with Max Reger at the Leipzig Conservatory), and he maintained a lively correspondence with both Schön-berg and other important figures including Alban Berg and Theodor W. Adorno (to which the published volume of letters edited by Vera Lampért testifies). But the Sonate für Kontrabass op. 36 (1935) alone clearly contradicts his label as an epigone or un-Hungarian: From the very first moment, this music, in the formation of theme and sentence structure, follows the laws of Hungarian grammar. The grand Adagio is an especially impressive example of the declamatory arch form and fulfills all the virtues of Magyar recitation art – although it ultimately leads into a highly labyrinthine grand scale and experimental mix of tonal relations, something which must seem quite "foreign" to the guardians of pure Hungarian cultural achievements (a certain closeness to "foreign models" from the French-speaking region seems to exist here, which would establish the link between Jemnitz and László Lajtha, to whom the "also" in the Dobszay quote refers). The result is a grand "music as speech" work that manifests itself as a fascinating, adventurous convolution of lines previously un-rivalled in the double bass literature.