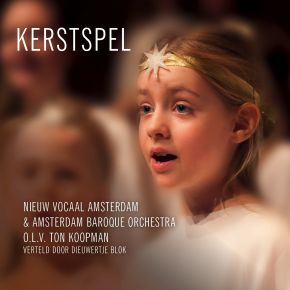 Nieuw Vocaal Amsterdam is a classical voice training programme specialising in opera, accessible to all children and young people from 4 years old who enjoy singing. Its was founded in 2005, roughly ten years ago, and immediately after the idea to perform a Nativity play on a yearly basis arose. In these performances, all students would be performing simultaneously. Ton Koopman's arrangement of Christmas songs for the Amsterdam Baroque Orchestra from a few years before were the starting point, musically. The first performance of the play was accompanied by only a piano, with angels, sheep and shepherds performing and singing alongside Mary and Joseph. It proved to be an immediate success, and thus it evolved into a full evening's entertainment.

Nieuw Vocaal Amsterdam (orchestra)More information
Amsterdam Baroque Orchestra (orchestra)More information
27-12-2017 Kerk & Leven
"This catchy CD should encourage every parish in Flanders to make Christmas time also musically attractive. In the dark days of December, this recording of beautiful traditional Christmas songs in the vernacular is simply a bright spot."
21-12-2017 NRC Handelsblad
"A choir can be so much more than singing.
During Kerstspel all 330 children of Nieuw Vocaal Amsterdam are on stage at the same time."

27-11-2017 Kerk & Leven
"The artistic management of NVA, with pride proudly announces that they already have 330 pupils in various roles - from little sheep to star, from angel to Bethlehem citizen, shepherds and master angels ... on stage and that they want to participate every year! Add to that a fantastic storyteller with the Christmas story from Mary's point of view, three soloists (Gabriel, Mary and Joseph) and also the Amsterdam Baroque Orchestra under the direction of Ton Koopman himself, and you get an amazing Christmas play. Without a doubt a golden recording!"
23-11-2017 Stretto
"Impressive Christmas play by Nieuw Vocaal Amsterdam and the Amsterdam Baroque Orchestra, lead by Ton Koopman"
17-11-2017 Klassieke Zaken
"What Ton Koopman, Nieuw Vocaal Amsterdam and the Amsterdam Baroque Orchestra do on their CD Kerstspel is traditional, but at the same time innovative."