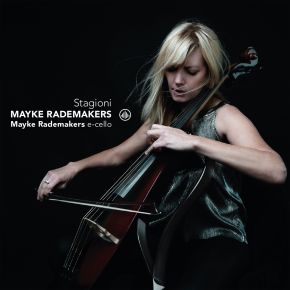 Mayke Rademakers: "The e-cello is a relatively new instrument; it has not yet conquered its true place in the world of classical music. It presents an enormous spectrum of sound colors as well as the possibility of polyphony when played in conjunction with a loop and other effect pedals. It has inspired me significantly as a classical musician and I cannot now imagine undertaking my compositions and improvisations without it. Improvisation directly engages intuition and spontaneity which in turn enlarges perspective.

"Following the improvisations which I combined with the Bach suites and works by contemporary composers (Challenge Classics CC72682), I felt the need to work on a larger piece. This has resulted in ‘STAGIONI’. I could not nor have I wished to ignore Vivaldi and have woven several quotes from his masterpiece into my improvisations. Inspiration has also come from the medieval mystic and first recognized feminine composer, Hildegard von Bingen. Other primal sources which have fed me along the way include early polyphony, Sephardic folk music and Afro-American blues. This was not according to any plan, rather repertoire influences which are recognizable only in hindsight."

05-02-2018 Musicalifeiten
"I listened to this Vivaldi adventure with great appreciation and admiration. In it, the cellist does not place herself between composer and listener, but casts new light (sound) or familiar themes, quite fascinating."
30-11-2017 Portici
"The season of Mayke Rademakers."