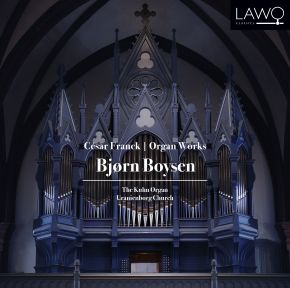 On my retirement from the Norwegian Academy of Music, I was given the generous offer of the use of the Uranienborg organ to practice on, an offer I have made very good use of. Over the years I have become increasingly enthusiastic about the instrument. Every time I sit down on the organ bench I relive some of the youthful excitement I felt that led me to choose the organ as my career.

I had been toying with the idea of recording Franck’s organ works for some years and had had in mind an instrument maintained in an uncompromising, French symphonic style. As I gradually played my way through the repertoire, however, I realized that it would not be easy to find a Cavaillé-Coll copy that would meet the demands of Franck’s music as well as the organ at Uranienborg did. Here I found a clarinet on the Ryggpositiv that could be used as a solo stop accompanied by full swell in the Grande Pièce Symphonique. There are flutes that balance full swell in the Final; a beautiful, singing tone in the foundation stops, and an impressive tutti. I do perhaps miss having French pedal reeds, the sound is sometimes a little too rounded. Neither is the flute on the Great overblowing as it would be in the French tradition, but what does that matter when it makes such a lovely sound?