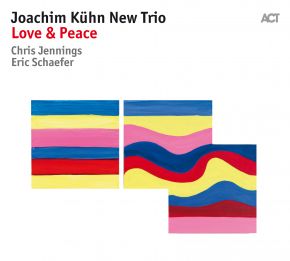 “The wisdom of old age meets the tempestuousness of youth” wrote Der Spiegel, describing the meeting of generations in Joachim Kühn’s trio with Chris Jennings and Eric Schaefer - both are around 30 years younger than he is. And it is also an apt way to describe how both tendencies co-exist in the 73-year old jazz pioneer’s own playing. His gaze is directed to the future, he has the history of jazz behind him, and he never kow-tows to convention. This piano genius loves freedom and fantasy, driven by the imperative to keep discovering the new. If the Joachim Kühn New Trio is his most recent adventure story, then “Love & Peace” is its second chapter.

Once again it's about “strong melodies that you can give a shape to,” as Kühn puts it. “I wanted melodic simplicity, an album with short concise pieces”. It is almost inevitable that the songs should deal with two things that the world desperately needs more of: love and peace. “I didn’t want to choose this repertoire in a hurry, but rather in a very considered way, but I did leave room for chance to play a role: “That’s how the short, almost ebullient melody of “Barcelona - Vienna” came into being during a flight between those two cities.

With “Chrystal Ship”, Kühn has once again taken a track by the Doors, the band which like no other is synonymous with his generation of 1968, and the peace movement in in an era overshadowed by the Vietnam War. Classical music is also there, with a luxuriant and grooving version of Modest Mussorgsky’s “Le Vieux Chateau” from “Pictures from an Exhibition”. A piece (“Night Plans”) from his unique and formative collaboration with Ornette Coleman undergoes an almost tender, new reappraisal by the trio, as does the turbulent Kühn classic “Phrasen"”. Kühn also asked his two partners to contribute one composition each.

“Only if you live freely can you really improvise freely,” says Kühn. For several years he has been putting everything in place to ensure his own personal and creative freedom at his finca on Ibiza . With “Love & Peace”, his New Trio has once again succeeded in breaking into new territory.