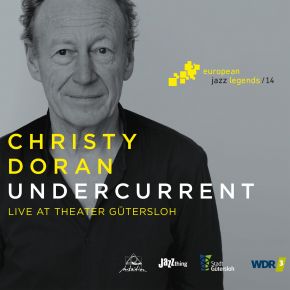 If Christy Doran looked anywhere near his age, the name of the group he presented in concert at the Theater Gütersloh in the summer of 2017 could easily be misread. But since the Irish-Swiss guitarist not only looks, but moves, sounds and thinks nowhere near his 68 years, this trio is surely not (primarily) a „fountain of youth“, but a collective, constructive, and ever flowing „Sound Fountain“.

Doran is a founding member of OM, a Swiss Jazz-Rock-Fusion group, which took it’s name from an album by John Coltrane. Their 1978 collaboration with Brazilian percussionist Dom Um Romao for JAPO/ECM was recently voted among Rolling Stone’s „100 greatest Jazz albums“. Meanwhile Doran, who still counts Jimi Hendrix among his greatest influences, has also co-founded the jazz department at the University in Lucerne, and played in a host of different bands and projects (and on over sixty recordings), ranging from his own groups „New Bag“ or „Bunter Hund“ on to recent duets with French guitarist Noël Akchoté, as well as composed music like „144 Strings for a Broken Chord“ for an ensemble with twenty guitars. Among the international instrumentalists he has worked with are Carla Bley, Albert Mangelsdorff, Edvard Vesala, Charlie Mariano, Iréne Schweizer, Piérre Favre, Sonny Sharrock, Tim Berne, Jim Black, Gunther Schuller, or Airto Moreira.

„Sound Fountain“ was founded in 2014, extending a longer standing musical friendship with the Argentinian bass-player Franco Fontanarrosa to include the Swiss drummer Lukas Mantel. It could be understood as an essence of all things Doran – „with various influences from Jazz to Rock to Ethno to Avantgarde“, as their website explains. „The trio will explore the musical territories pushing to the limits the capabilities of the standard guitar trio.“ And this they did on that Thursday in early September, tackling a new repertoire from Fontanarossa’s poetic rock-miniature „Abstracción Felina“ via an excerpt from the above mentioned composition for large guitar group by Doran and on to bluesy grooves like their encore „Bad News Babe“. Solid, sometimes spherical sounds, a musical experience balancing improvisation and composition, always energetic and elegantly flowing, „Sound Fountain“ certainly lives up to its name on this live recording.