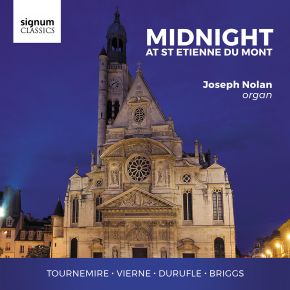 With a title inspired by Woody Allen’s ‘Midnight in Paris’ (the opening scenes of which were filmed on the church steps), ‘Midnight at St Etienne du Mont’ explores the music of Duruflé, who was Titular Organist there from 1929 until his death in 1986. As well as Durufulé’s own Suite Op. 5, at the centre of the programme is the premiere recording of David Briggs’ Le Tombeau de Duruflé – a brilliant work built on plainsong themes that Duruflé so loved himself.

British-Australian organist and choral conductor Joseph Nolan has been hailed by ABC Classic FM as “an extraordinary musician”, BBC Radio 3 CD Review as a “virtuoso”, and Limelight Magazine, Australia as a “remarkable musician”. In 2016 he was awarded the medal of Chevalier de l’Ordre des Arts et des Lettres by the French Government for services to French music