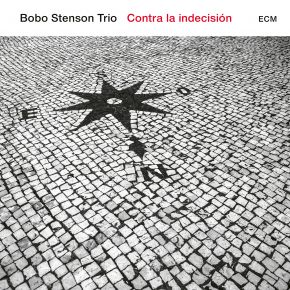 The great Swedish trio of Bobo Stenson takes a stand against indecision in a decisively beautiful new album. As ever, the trio draws upon a wide range of source materials. A yearning title song by Cuban singer-songwriter Silvio Rodríguez, Bartók’s adaptation of a Slovak folk song, a piece from Mompou’s Cançons I Danses collection, and Erik Satie’s Elégie are integrated into the programme, alongside original compositions by Stenson and Anders Jormin and group improvising. So strong is the group’s character and the musical identity of each of its members that the integration of this material always feels organic and logical. Stenson’s lyrical touch, Jormin’s folk-flavoured arco bass and Jon Fält’s flickering, textural drumming are all well-displayed on Contra la indecision, the trio’s first new recording in six years. Produced by Manfred Eicher, the album was recorded at Lugano’s Auditorio Stelio Molo RSI studio in May 2017.