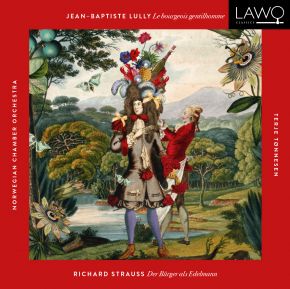 LE BOURGEOIS GENTILHOMME
First performed on 14 October 1670 at the Château de Chambord, in the Loire Valley, Le bourgeois gentilhomme (‘The Would-Be Noble’ or ‘The Middle-Class Aristocrat’) was one of nine comédies-ballets on which Molière and Lully collaborated between 1664 and 1670. A stage-piece that combined spoken or sung comedy with dance, the comédie-ballet was a development of the ballet de cour (Court Ballet) and, as a precursor to the tragédie-lyrique (of which Rameau became the greatest exponent), played an important role in establishing the form of French opera.

The plot of Le bourgeois gentilhomme concerns Monsieur Jourdain, a middle-class (bourgeois) son of a cloth merchant who aspires to rise to the ranks of the aristocracy. To learn the ways of the nobility, he hires instructors in music, dance, fencing and philosophy, and he commissions suitable attire from a master tailor. Jourdain is exposed as a fool by each of these attendants.

*****
DER BÜRGER ALS EDELMANN
Even before the curtain first went up on their second collaboration, the comic opera Der Rosenkavalier in October 1911, Richard Strauss and his librettist Hugo von Hofmannsthal were discussing the subject of their next project. (They had launched their partnership with the chilling, modernistic Elektra of 1906–08) After much volleying of suggestions, counter-suggestions and disagreements – a pattern that characterised their correspondence over the 23 years of their partnership – Hofmannsthal suggested he make a two-act adaptation of Molière’s Le bourgeois gentilhomme (Der Bürger als Edelmann in German). The play would be performed with new incidental music by Strauss, and the concluding ballet entertainment, the Ballet des Nations, of Molière’s original would take the form of a new opera, Ariadne auf Naxos, to be created by Hofmannsthal and Strauss.